In the earlier section Part -2 , we have learnt:

Have you ever thought of what would happen if you’re on the receiver end of a channel and you accidentally close the channel? Or mistakenly try writing on a receiver end or reading from a sender end?

To avoid these accidental errors, channels provide a better syntax to indicate whether a channel is just for reading or writing.

First let’s try closing a channel on the receiver’s end.

When we run the above program, we get the following error:

The error is self explanatory, we’re trying to send into a channel which has been closed by the receiver. Now how do we restrict a receiver from closing a channel but not the sender? By passing the <- operator while initializing channels or when passing them.

Let’s pass the channel to the send function as ch chan <- int and seperate the reading of the channel into another function.

Notice how the parameters of send and read have ch chan<- int and ch <-chan int respectively. The syntax means that send only writes to a channel and read only reads from a channel.

Now even if you try to close the channel in the read function before the for loop starts, it throws a syntax error like this.

Try writing into a channel in read now. And then try reading from the channel in the send function and see the output for yourself.

It again throws a syntax error:

Now that we’ve understood the read/write channels and how we can avoid pitfalls and errors, lets move forward.

As business and systems scale, there wouldn’t be just one goroutine in the application. There might be hundreds of them or even thousands. And these goroutines might be communicating between themselves via multiple channels. And sometimes when one goroutine blocks, the others keep running. So it implies that if one channel is waiting for data to come in, other channels already have data in it and are in need of a receiver i.e they are ready to deliver data. So is there a way we can use whatever data is incoming from whichever channel instead of waiting for whether or not the others have data? Absolutely.

The select keyword lets you get values out of simultaneously running goroutines. It is like a switch statement but for channel operations. There’s also a default case in select just like in a switch statement.

The select statement does the following:

The select keyword is generally paired with the for loop in Go. We either loop infinitely if we have no clue about how much data we get into our channels, or in a for range loop.

Let’s see how select works in the following program. We initialize two unbuffered channels helloChan and worldChan and pass data into it in two seperate goroutines. Notice how we didn’t use a for loop here because we know that only one data element is going to be received by the channel.

Upon running several times, we see Hello or World! in the output. This is because both of the channel operations at line 16 and 18 are non blocking. So any one of them is selected at random.

Now let’s try blocking one of them by adding a time.Sleep before sending data into helloChan. Our hello functions becomes this.

Now the program always prints World! because the first case is blocking. We’re sleeping for 100ms before sending data into helloChan and by then, worldChan already has data in it ready to be delivered. So the select statement always executes the second case.

Let’s try a send operation on a channel and see what happens:

This can either print out Hello or World!. Now its upto you, to try adding a blocking call by making one of the goroutines sleep for a while and explore all the combinations.

Let’s try adding a default case and we see that it does something interesting. Our select statement becomes this:

Now we see that the program always prints default case. But we’ve seen that default case gets executed only when all the cases cannot proceed. But they were proceeding in the previous example when the default case wasn’t present. What is different now?

In the third and fourth point of our select introduction we’ve seen that:

If all channel operations are blocking, it waits until one of them isn’t.

If none of the channel operations can proceed, and there is a default case, it executes the default case.

So in the previous example, there is no default case. So select waited for atleast one of them to happen and executed that case immediately. But now since the default case exists, select doesn’t wait anymore and proceeds to run the default case. Try adding a sleep just before select and see what happens for yourself. That’s an exercise for you.

Let’s see a real use case of select.

When we run this we get the following output:

We see that every 1 second, we get both Hello and World! gets printed. But that’s not what we need. We need World! to be printed twice every one second because we’re waiting only 500ms before sending data into worldChan.

So finally, by the end of 1 sec, we need Hello to be printed once, and World! to be printed twice. But this doesn’t happen because, the read at line no. 17 i.e <-helloChan is a blocking one. It blocks until the one second gets over at line no. 25, and then it proceeds. Since it blocks, <-worldChan doesn’t get called.

Now lets replace the for loop with a for-select loop.

Now when we run this, we get the desired output:

The control flow can be understood better by the following picture. 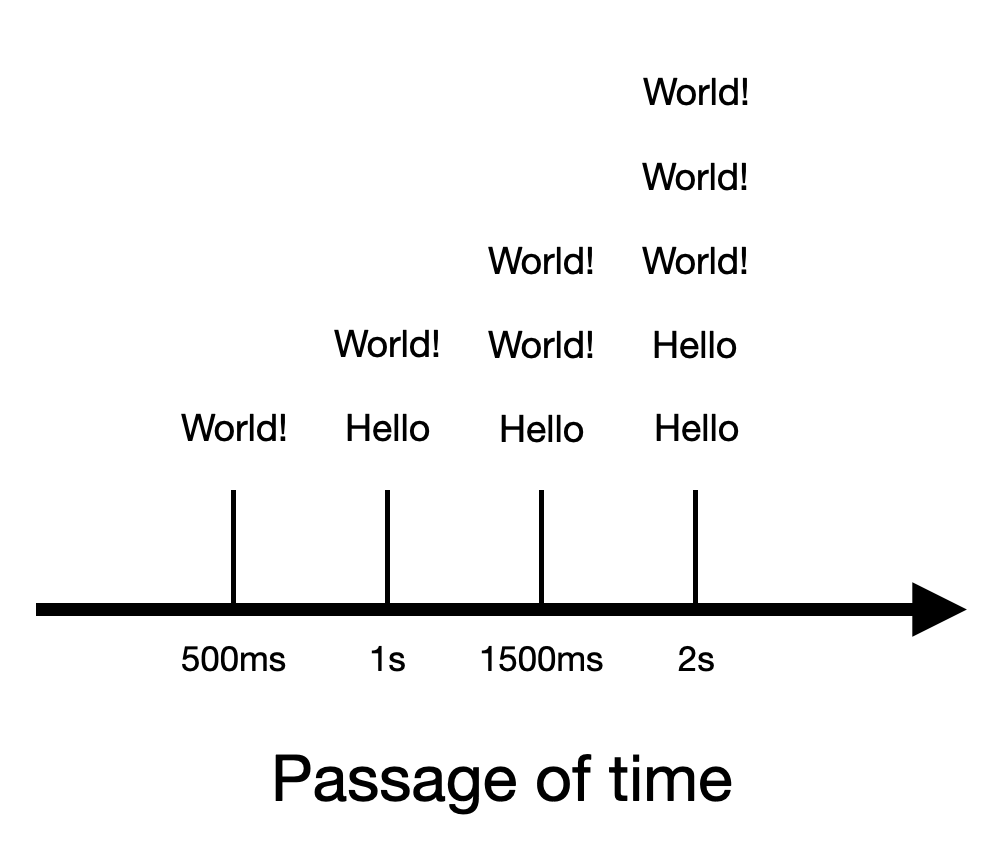 You can imagine the usage of a timeout in a channel, where after time t, we send a message onto the channel saying “Hey, its time we did something else instead of waiting.”

A basic timeout implementation can be done by the following

When you run this, the program prints It has been 3 seconds. Timeout! every three seconds.

Try blocking the hello and world functions for more than 3 seconds each, and add a return in the timeout case.

Try running this and see the output for yourself.

We used the timeoutChan for demonstration purposes but Go has something neat exactly for this functionality where we don’t have to make our own timeout channels. It’s the time.After() function that returns a channel and sends on it, after a certain period of time.

The above example can be converted to the following and that’s all we have to do.

Hope you enjoyed the third part of the tutorial. In the next one we see a real world example of how we use channels.

Check it out at Part-4 Image Processing with channels

Please reach out to me via email(or any social media linked down below) if you think I haven’t covered something which you consider important.

Introduction We know that Goroutines are independently executing user space threads. Imagine an office workspace where ten employees are working towards a customer satisfying goal. These ten empl...

A Tiny Recap In the earlier section Part -1 , we have learnt: What channels are How we initialize them How we read from and write into a channel How we make goroutines communicate with c...

A Tiny Recap In the earlier section Part - 3 , we have learnt: What read and write specific channels are How we use select in the context of goroutines Finally, how we apply timeouts in se...